~~Holly shares the birth story of her son Raynier~~

Monday morning (11th) I went to see our Osteopath and got my last treatment before the baby came (well, I probably would’ve gotten another if Raynier would’ve been overdue). I never did have much pain or discomfort other than from sitting in one position too long or in the wrong kind of chair or something like that. We discussed her coming to the birth again, and she was just as eager… well actually more so since they are now expecting a wee one!

That afternoon the kids and I went out to the airport to pick Bryan up, he dropped us off home and then left for work. I had been having contractions while we were in the car, so after we got home I put a movie on for the kids, and sat with my feet up and read a book for a while. The contractions were not hard or long, but they were coming every 2-5 minutes. This lasted for five hours. Once I got the kids to bed, the contractions were less frequent, but began to increase in intensity. I tried sleeping, and did doze some, but either my mind would keep me awake or a contraction would wake me up. They ended up petering out around 3:00 am, and I was able to sleep until about 7:00.

Tuesday morning (12th) I took a nap, thinking that if something was going to happen, I’d need to have a bit of extra sleep behind me after the night before. After the kids’ naps, their grandparents came and took them and Bryan and I went on a 1- 1 1/2 hour walk. We just stuck to our street, walking up and down. The contractions were stronger going downhill and more frequent coming up. 🙂 But they were getting quite strong, towards the end there were some that I nearly had to stop walking through. But again, we came back to the house and they slowed way down. My midwife came an hour or so later to check me, and funnily enough, I was actually relieved to find out that nothing was happening. I had started to feel like there was something I should be doing to keep things going, so finding out that I wasn’t dilated at all and that my cervix was still long took all the pressure off me.

So Wednesday (13th), I completely ignored the contractions, even though they were definitely stronger than they had been pre-Tuesday. I don’t know that I ever had more than three in an hour, so it was easy to do. I pretty much did nothing that day, just took it easy, had a nap when the kids did and so on. Bryan had been able to rearrange the rest of his week so that Wednesday was his last day for the week.

He got home from work at around midnight Thursday morning (14th), and having been awakened, dozed on and off, registering that I had two or three contractions in the next hour, but not really thinking about it since they were no harder then they had been the day before. Just after 1:00 am I began to have another, and suddenly had to crawl out of bed because it was too painful in the position I was in. After it was over I went to the toilet, had another there and then back to our room and had another one, all of them just as hard. It was about 1:20 by this point, so I came out to the lounge to tell Bryan (who was just getting ready to come to bed) that maybe something was going to happen. Bryan started getting things ready and I wandered through the house, the contractions continuing strong and between five and ten minutes apart. We called our midwife at 2:45 as they began to get stronger and more regular.

The midwife arrived at 3:20, checked me and I was 2-3 cm at this point. I was having a hard time finding a good balance between hot and cold, and kept trembling uncontrollably. This made the contractions more difficult for me to handle since I couldn’t relax as much through them. After being checked, I was able to roll over on my side, and had a little respite from the contractions, although I was still shivering. My midwife asked if I’d like her to go and come back, but I asked her to stay since the contractions had started out strong so suddenly, completely different from the other two births. I must have rested for half an hour or so, and then got up to move around again to get things going.

Our Osteopath arrived at 4:30. I wasn’t even aware that she was here at first. She stayed in the background or helped out with anything that the midwife or Bryan needed.

At about 4:45 they started topping up the pool, and I got in about 5:10 (midwife notes help when writing a birth story ;). The midwife checked me again at about 5:20, and I was 5-6 cm dilated. I felt much more in control this time, breathing wise. I’m not sure what the reason was for this, but I only remember letting the contractions overwhelm me once or twice and having to be reminded to breathe slower. The back pain was stronger this time as well, and for a while Bryan was putting constant pressure there for me, even between contractions. The pool of course, felt wonderful. I had quite strong pressure at the base of my belly throughout the whole thing, and had been putting counter pressure there during contractions. The pool helped ease this somewhat, and the hot water they kept pouring on my back was helpful as well.

Just after 6:00, the midwife called her backup, and Bryan called his parents to let them know that the baby was coming and that the kids could be waking soon.

At about 6:05, Symeon (3 years) woke up. We hadn’t really talked about having the kids in the room or not, and I really didn’t know if it would bother me. But it didn’t. Symeon came in to say good morning, saw me in the pool and said, “Daddy, why is Mama in the pool?” Bryan told him that Mama was going to have a baby. Symeon looked at the sides of the pool (inflatable and covered with fish) for a minute, then back at me and said, “A baby fish??” He was really great in there, it didn’t seem to bother him that I was making noises. Bryan’s folks got here and got things ready and were going to just go home and come back for Verity (21 months), when she woke up about 6:20. She didn’t come in before the baby came. Symeon went back out to see what his grandparents were doing.

And, at 6:36, Raynier Paul Dominic arrived. Symeon and Verity were able to come in immediately and see as they hadn’t left yet, and Bryan’s mom also came in to see her new grandson. They didn’t end up leaving right away since the baby arrived so that the kids could be a part of the baby discovery.

Congratulations Holly, you have a beautiful family and Raynier is a gorgeous new addition!! 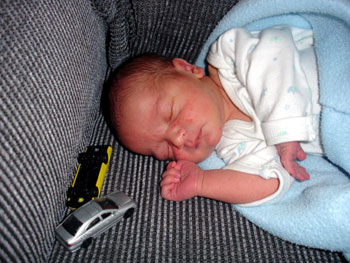