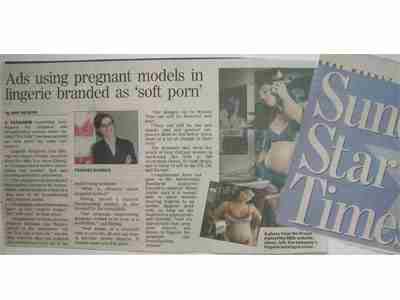 July 2007
Sunday Star Times story where we were interviewed regarding the sexy HOTmilk Lingerie that we had just started selling, and how a few people who received our newsletter had complained about the images.

This story snowballed in the media, and ended up on John Campbell TV3

The catalogue was distributed to potential customers by Breastmates, which markets online to a database of 780 breastfeeding and pregnant mums.

Breastmates website director Frances McInnes was flabbergasted by the complaints: “Oh my God, take a chill pill,” was her first reaction, then she realised the reaction had to be due to the model being pregnant.

“What is offensive about pregnant bodies?”

Ebbing, herself a staunch breastfeeding mother, is also shocked by the complaints.

“Our campaign, empowering pregnant women to be sexy, is a world first,” said Ebbing.

“Poor mums, at a stressful time in your life, all you can wear is horrible brown lingerie.  It doesn’t make you feel good.  Our designs say to women ‘you can still be beautiful and sexy.’  They can still be fun and cheeky and our product empowers them to feel better when there is a lot of change in their lives.”

The brochure that drew the wrath of New Zealand women is marketing Hot Milk to 100 Australian stores, 55 local shops, and is about to sell in the US, UK, and Europe.

Complaints have not gone to the Advertising Standards Authority.  Executive director Hilary Souter says it is acceptable to show women wearing lingerie to advertise lingerie products, as long as the depiction is appropriate and tasteful, “and its appropriate that pregnant women are shown in lingerie for pregnant and breastfeeding women.”