gela shares her birth story.  After complications following delivery and being told to say Goodbye to their precious baby, they discovered their baby is a fighter.  This is a true miracle. 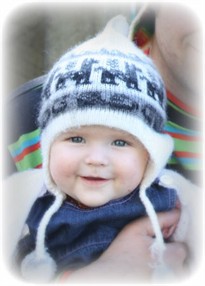 Couldn’t believe I had made it to 40 weeks – felt a bit jibbed really, with Miss O arriving at 37, 3!!  Had a midwife appointment in the morning, and everything looked right on track – apart from Miss V not wanting to come out yet!!  Tina gave me a form to book a scan for the following Monday, if Vittoria hadn’t arrived by then.

Steve had taken the day off work to go to the midwife appointment and we then went to Gayl’s for lunch.  I was having a few crampy type feelings, but thought that they would just cease like they had the last few weeks!!  Went home and decided I would have a rest – so curled up on the bed, and had a 3 hour nap!!  Woke up around 1730, feeling a bit uncomfortable, and decided I would start trying to time the cramps.

Around 1900 I rang Mum and Tina – to advise them that it looked like this could be it – finally!!  Mum said she would have a shower and head out – as she was going to stay and look after Olivia.  Around 2100 the contractions started getting closer together and stronger, but manageable.  I went to bed about 0000, and managed to doze through the contractions till about 0230, when I was aware that I might wake up Steve with all my moving around, so went out to the lounge.

Labour was a bit different to Olivia’s – I didn’t feel nauseous, but felt the uncomfortable “need to pee” thing all the time!   Laboured till about 0315 with the contractions getting closer together, and rang Tina again.  She said it was my call as to whether I wanted to head into the hospital now, or wait for another half hour or so.  Steve was absolutely adamant “I’m not delivering a baby at home!” so we opted to go in.  Woke Mum to let her know, then slowly made our way to Waitakere Hospital, where we arrived about 0415.

Was taken straight through to the labour ward, and put into a room with a birthing pool.  Started filling the pool as I hoped to use it again like last time.  Tina came in and asked to examine me – at this stage I was labouring standing up leaning into the bench.  I got onto the bed, and that’s where I opted to stay for the rest of the labour!!  After my examination, Tina said everything was looking good, and I was about 5-7 cm, so well on the way.

Continued to labour till around 0600, refusing  the birthing pool, and any kind of pain relief.  Tina was a bit concerned that despite being 8 cm, I didn’t appear almost fully dilated and ready to push.  She checked me again, and said she could feel the birth sac, but that baby’s head was still relatively far up.  When the waters were birthed, and there was a large amount of meconium in them, and this was worrying.   I then had the fetal monitor attached, and it showed a decrease and non-recovery in Vittoria’s heart rate after each contraction.  Due to her position, she was a little hard to monitor, so then a fetal scalp clip was put on.  Unfortunately it didn’t attach well, and had to be done again – not comfortable!!

At this point the charge MW Tracey was paged, as Tina wasn’t happy with things in the labour.  Hannah (the student MW) also tried paging people but accidently triggered the emergency response, which got people running to the room.  However, when Tracey examined me, she decided I needed an emergency c-section, due to Vittoria’s distress, so in hindsight – Hannah calling the emergency was a good thing.

Next thing I knew I was being whisked away to surgery with Tracey telling me NOT to push,  IV lines going in my arms, Steve signing things and me freaking out – just a little, and begging them to help me and my baby – not quite how I had planned it!  I was also in and out of consciousness a bit – and was having the gas and air at this point too.

On the way down to theatre I kept telling them I wanted to push, as I could feel her head right there.  Got to theatre – told them I wanted to push again – was checked again, and told, “Too late for a caesar – baby is crowning – push now!”.  Tracey said later that the look on my face was classic – it was a WTF look – told not to push, then told TO push!

Vittoria was born very rapidly after that, followed by about 800ml of blood, then the placenta – perfectly intact, but very very pale.  Vittoria was basically not breathing, and had a very slow heart rate – of about 50-60 – less than half of what it should be.  It took her 6 minutes to breathe on her own (oxygen was being given to her all of that time).

I remember being on the bed, with the student MW holding my hand and trying to keep me calm, while I was looking (or rather craning my neck and trying to look) at all these doctors swarming around Vittoria, doing goodness knows what, and them worrying about the amount of blood I had lost too.  She was so so so pale, and not moving or doing anything a newborn should, it was terrifying!  The only thing that kept me from leaping off the bed with the student MW Hannah

I was taken away pretty quickly to recovery, with Vittoria being taken to SCBU, all on her own.  Poor Steve at this stage had no idea what was happening, but as he later told me – he knew it was serious, as the hospital director had come to see him to let him know there was no real news – but that Vittoria was here, I was ok, but Vittoria was in a critical condition.

After a wee while in recovery, I was taken down to the ward.  I asked to have something to eat, and a shower, as was feeling a bit icky after birthing.  One of the paediatricians, Chris, came in to tell us what was happening.  Vittoria was very very sick and it didn’t look very good.  The tests on the gas levels in her blood/body were really high, and weren’t showing any signs of decreasing.  Auckland NICU had been called to come and collect her, and transport her there.

Steve came with me into the bathroom, for safety, as I had lost a fair amount of blood and they were worried about me fainting in the shower.  I have to say, it was the best shower in a VERY long time!!  Got out and in the next room heard a NB cry, and absolutely lost it.  Collapsed onto the floor in tears.  After recovering and dressing, we were taken down to SCBU to meet Vittoria, as the NICU team was there, getting ready to take her through to Auckland.

Meeting Vittoria was shocking, and I wasn’t prepared at all.  She was hooked up to wires and tubes and things, and was so so pale, just lying there, not doing what a new baby should – sleeping and making funny little noises!  Her poor little hands and feet were so bruised from all the lines going in, and her little tummy button was like a pincushion.  We were told she was still fitting, and they had given her medication already to keep her comfortable (morphine) and were contemplating giving her barbituates for the seizures.

The staff from NICU talked to us about the tests they had run and what they felt was the best thing to do, which, in their opinion, was nothing.  They said it really didn’t look good, and that the tests were not promising.  They also said that taking Vittoria to Auckland and doing the cooling thing on her (to hopefully limit brain damage) was probably not going to be beneficial, and could make whatever time she had, unpleasant.  They also said however, that if we wanted them to, they would take her to Auckland.  Steve and I didn’t even have to decide – we both felt that if it was of no benefit, that we would have Vittoria remain at Waitakere, and from there, we started calling family to come and meet Vittoria, as this could be their only chance.

We held V’s hand, touched her face, spoke to her, kissed her and talked a lot to her, explaining who we were, what was happening, and why we were deciding to do what we had.  It literally broke our hearts.  The SCBU staff took foot and hand prints for us and tonnes of photos. 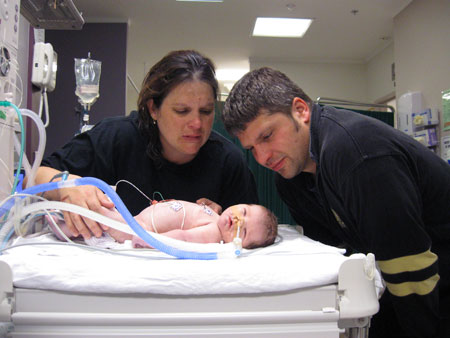 We were able to move to the isolation room, as Vittoria was only on the oxygen, and no other monitors.  She  didn’t need it 100% of the time – she was a little fighter and was trying to breathe on her own.  We got to have a lot of cuddles, and everyone in the family managed to come and meet her.  At approximately 1530 we removed her breathing tube, and just waited, as we had been told to expect, when it was removed, that she would pass away.

The time passed agonisingly slowly, and felt like it had stopped.  Every time she slowed in her breathing, my heart stopped, and I thought this was the minute to say goodbye.  However, Vittoria defied all odds, and kept breathing and breathing and breathing!  Then, that night at around 1900, 12 hours after she arrived in this world, she was looking for food!

Although she didn’t manage to breastfeed much, and we had to top her up through the tube, it was amazing to be able to try and breastfeed her.  That night, Kym (SCBU charge nurse) took V out at around 0200 so I could get some rest.  She brought her back in at about 0430, as she wouldn’t settle.  Was popped onto the breast, and fed!  She was then so contented and went off to sleep.

My milk came in on the 14th October, and before that we used formula for the night of the 11/10, and used EBM from Sharron till my milk came in – it was an amazing gift, from an amazing lady.  She had her first bath on the 15th October, did her first BF poop, and had her NG tube taken out.  On the 16th Oct Olivia held Vittoria for the first time.  V was also weighed on the 16th – and had lost 9% – taking her to 3.49kg.

From there, she just continued to improve!  We spent an agonising 10 days in SCBU, including travelling in an ambulance to North Shore Hospital for an MRI on the 14th October.  After the MRI showed no significant damage, and she was BF exclusively, we were allowed to go home on the 20th October, after spending a fair few nights in the family room (“moved in” on the 14th October) – including the RWC Final Night – which V “watched”!

Since coming home, Vittoria has continued to amaze and astound.  She is a little fighter, and a lovely baby.  We had an EEG at Auckland Hospital on the 2nd November 2011, and the results showed as all normal.  Our HC4K’s nurse Sarah, is delighted with how she is doing, as is the Neuro Developmental Therapist  Rita.  For now, we just need to love, adore and enjoy her, and will have to wait and see what may happen, but amazingly, it looks like our adorable baby girl has defied all the odds and is a miracle!