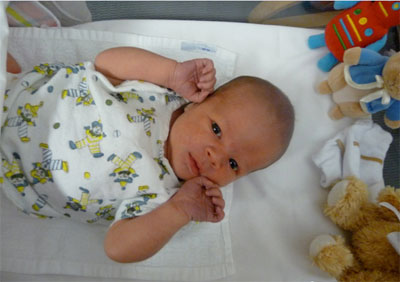 Right from the beginning I knew that my baby was going to do things its own way.

I had quite long cycles so dating my pregnancy was a bit tricky even though I KNEW exactly when Aunt Flo dropped by (Hard to forget a birthday present like that).  Six weeks in I had a bit of bleeding and scored some new dates with a scan at the hospital.  Over the course of my pregnancy I had been given EDDs ranging from 25 March to 10 April but once I saw my obs at 12 weeks he decided that April Fools Day was the most likely so we ran with that.

I had pretty bad morning sickness for the first 20 weeks.  Not bad in the way that it was constant but bad in the way that it was violent.  I was nauseous most of the time but only physically sick every few days, problem was that when I was actually sick it came with enough force to burst all the blood vessels in my face and down my neck and turning me into a Dalmatian covered in red spots that took a week to fade each time.  Despite all this my baby was growing fine and on track for an April 1st arrival.

In the beginning my baby decided that lying transverse was the most comfortable and stayed sideways up until 32 weeks.  Lying across my hips may have been a lovely way to relax but it resulted in me having a flat spot at the top of my uterus as it stretched out and not up as my baby grew.  A pleasant side effect of this was that my insides were not crushed up against my ribs as much as they should have so I avoided reflux and breathing problems but my independent baby had created a problem for itself by restricting leg room.  So my baby tried to combat this by turning breech, then oblique (kind of wonky on an angle), then back to breech, then back to transverse and finally decided to turn head down but instead of curling up tight put his legs straight out to the side where the room in the womb was.  To give you an idea of how strange my baby’s position was here is a picture of me at 36 weeks after I had stopped working.  Believe it or not I am actually sitting with the camera straight in front of me.

On Wednesday 17 March we got a scare because the baby had not moved all day so that night we spent a couple of hours hooked up to monitors at the hospital to check it all out.  Luckily everything was fine and we got to go home and wait until something happened.

On Friday 26 March I had been feeling pretty tired all day which was unusual for me and decided to go to bed early as soon as my daughter was asleep.   Nothing special, just a bit tired.  I put it down to spending the day finishing the last of my to-do-before-baby list.  At 3am I woke with the feeling that pregnant women know all too well “I need to go to the loo… again” I laid there for a moment or so slowly trying to summon the energy to get up and suddenly I got the feeling that I had to go to the loo NOW!   I leapt up from bed and ran to the bathroom moving faster than I had moved in a long time.  I managed to get to the bathroom just in time for me to explode into the toilet.  OMG this was it.  I was going to have my baby.  My waters had broken.

I sat there in disbelief for what seemed like hours but would only have been about 5-10 minutes in reality.  I considered yelling out to my still asleep husband but didn’t want to wake my daughter.  As the flow had stopped I tried to get up, nope, sit back down it’s still coming.  At that point I hit my head on the wall which woke my husband enough to call out “Are you ok?” to which I replied “Umm…No”

He stumbled out of the bedroom to see me stripping out of my PJ’s clamping a pad between my legs.  I told him that I would call the hospital whilst getting dressed if he could call my sister who lived close by to come and mind our daughter who was still asleep up the hall.  We packed the car, I grabbed some towels and the waterproof cover we had for the seat and waited for my sister to arrive.

My husband was in panic mode.  My waters had broken and he wanted to get to the hospital ASAP.  Whilst we waited for my sister he hurriedly showered, packed the car and made our daughter’s lunch for school even though it was now Saturday!  My sister arrived and we were on our way.  Towels in hand I waddled out to the car whilst my husband ran ahead and started the engine.  When I opened the passenger side door, my hubby snatched the towels out of my hand saying that I didn’t need to bring them as the hospital would have their own and threw them into the foot-well!  I explained that they were for the seat and he apologised and spread them out for me to sit on.

After getting every single red light we arrived at the hospital at around 3:30am on Saturday 27 March and hubby breathed a sigh of relief.

When my daughter was born I bled really badly so when coupled with a low lying anterior placenta this time around my obs had special instructions for when I went into labour to prevent the same thing happening again.  On admission I had a cannula put into my arm and was hooked up to monitors and a fluid drip confined to the bed whilst they took a blood sample to check my iron levels and waited for the results.  Here everything slowed.

My contractions were irregular.  I was getting a run of four or five right on top of each other followed by a long break then another one then a long break then another run and so on.  My baby had turned posterior and couldn’t put pressure on the right parts to keep the contractions regular.  I was hooked up to a synto drip which meant I had to be continuously monitored.  I had to spend the rest of my labour on my back strapped to the bed which is the WORST place to be if your baby is posterior.  Unfortunately with my history it was the best place for me to be as the drip was turned up and up until finally my contractions were 2 mins apart at around midday.  Yep, I had been putting up with all that for about 9 hours.  As my cervix wasn’t properly dilated yet I was granted my wish for a pethidine shot and thankfully was able to rest for a while and I think I fell asleep.

The next thing I knew I was surrounded.  My obs was at the foot of the bed sitting on my ankle to keep me focused on the job at hand.  Beside him was a midwife.  To my left was my husband and then a second midwife entered the room and stood at my right. I had to push.  I was in agony and so tired.  My baby’s spine was pressed hard up against my own.  My spine was pressed hard against the bed.  My left arm was covered in IV lines and my stomach was strapped to the CTG.  I couldn’t move.  Somehow I managed to summon the strength to push and my baby finally started to move.  This was when my obs began to push back on my baby’s head to slow him down because he was coming too fast and I needed time to stretch properly.  It hurt so much, I was pushing one way and my obs was pushing the other.  After a few more contractions he stopped pushing back on my baby and he was allowed to enter the world.  I did it.  I managed to give birth to my baby sunny side up with no stitches, no tearing and no haemorrhaging and I also avoided an emergency c-sec by the skin of my teeth.

Thankyou for taking the time to read my story and share in the joy of the safe arrival of my son.