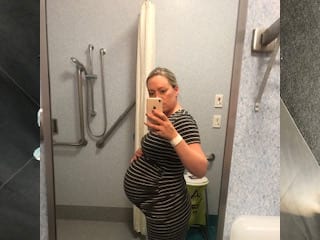 I first heard of this condition was when I had an anatomy scan at 19 weeks by a very experienced sonographer, who I  am eternally grateful for his diagnosis. At first I didn’t think much of it as he said my midwife would explain. He told me I had suspected vasa previa type 2.

This is when you have low placenta which has an extra lobe which is connected by baby’s vessels and was sitting right over my cervix.

I kind of just shrugged it off thinking it was nothing until I got home and googled what it was – and then it all hit me. My baby could die very easily if I had any complications. I tried to find more information about it but the majority of information was American and I only found one story from New Zealand. I then saw my midwife and doctor the following week and we set out a plan to be referred to the hospital obstetrician and come up with a care plan.

That following week I had a small bleed. My heart sank when I saw the blood and I called my midwife and my husband took me to hospital straight away. I was checked over and everything appeared to be fine so I was sent home. Thankfully nothing came of that and I put it down to stress as we were moving house that week. I then had a scan at 28 weeks which came back inconclusive so had to have another scan at 31 weeks. Which confirmed my worst fears, it was vasa previa type 2. There was a large vessel, baby’s vessel, right over my cervix which meant I had to be admitted to hospital to stay until a planned c section at 37 weeks.

I felt overwhelmed, nervous and scared. I had a four year old son who I’ve only ever been away from for 2 nights max. I couldn’t bear the thought of being away from him for so long, And my husband as well. I’d still be able to see them as thankfully we live within 30kms of the hospital. Too far for me to stay home as I’d need to be rushed to surgery within minutes if anything happened.

I had a few days to sort my family and pack all my things. Then the day came where I was admitted.  My husband and son took me in to the hospital and settled me in then I had to say goodbye. It was sad, emotional and overwhelming yet surreal.

My hospital stay was interesting as I had a shared room in which I had 10 roommates. Some are now good friends others not.

I was very well looked after by the midwives, nurses, aides and kitchen staff.

I got to know the routines and it became very mundane. I set out my own routine and had visitors most days so it made it more bearable.

I had started having tightenings, braxston Hicks, coming and going mostly at night. Then one night these became very regular, one every 10 minutes. I was on the ctg machine having me routine monitoring. They were picking these up and also I was starting to have pain with them. Then they became more frequent 2-3 every 10minutes. I was in disbelief as I was only 35+4 weeks, with my son I was induced at 10days past my due date with no signs on labour, so I didn’t really believe I was going into labour.

I was rushed down to birthing suite where my husband came and met me there and stayed the night as I was monitored all night. They gave me medicine to try and stop the contractions but it didn’t work for me, she was ready to come and at this point there was no stopping her. I was bumped up the list for a c-section and given an injection to try and stop labour progressing.

Then they prepped me for the c-section, I was so nervous and worried if my baby girl would be ok.

It was quite strange going in for a c-section this time, last time I had gone through labour and by the time I had my c section I was exhausted and a bit out of it.

This time I was fully aware, I had my spinal,which wasn’t as bad as I expected, then it was all go!

It didn’t take long until they got her out, I heard her cry and my heart knew she was going to be ok. I didn’t get to see her as she was worked on by the neo natal doctors but my husband was able to be with her. My midwife took some photos of her and showed them to me. She was beautiful and I was so relieved.

Then as they wheeled out baby girl up to NICU I got to briefly see her in her incubator and my husband went up with her.

My midwife stayed by my side as I was put back together then taken to recovery. She then went up to nicu for bit and I lay there on my own feeling overwhelmed and surreal that I had actually had my baby.

My husband returned and let me know she was ok. It was very emotional for everyone. As I had lost a lot of blood I had to stay in recovery for a while but when I was wheeled up in my bed they took me to NICU to see my baby girl and I was able to have some skin on skin tone with her. It was our first hug, wires, tubes, oxygen and all. Instantly I had a connection with her.

Our daughter was in NICU for 20days and we are so thankful for the amazing team in Nicu. The day we got to bring her home was one of the best days after our long journey of 43 days in hospital, my stay of 3 weeks and another 3 weeks going to nicu everyday, which was challenging for our family but we made it trough and we are stronger together now. 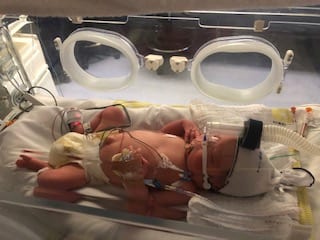 I often wonder if the vasa previa caused the early labour or if it was just from the stress I went through being away from home. The main thing was I was in the right place at the right time and am so glad our daughter arrived safely into this world. She completes our family of four and I am so glad my vasa previa was found early, this saved her life. 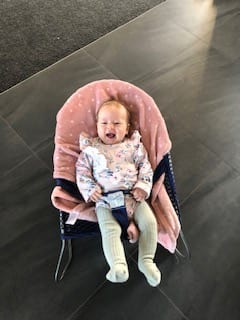