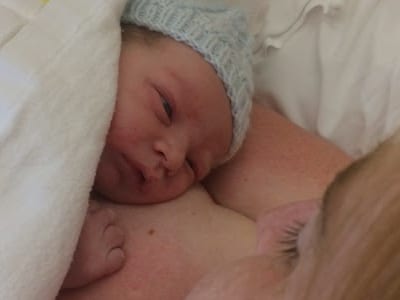 On my husband’s birthday (17 March), we had visits from his parents and sister.  It was a very busy day and by the end of his parent’s visit I was feeling gross and knew this was the start of something, if not labour.  My Mum and Dad were due later that afternoon so I went and had a lie down. I felt better after that and we all went in search of a hot curry for dinner.  Unfortunately the Indian restaurant we were headed for was closed so we ended up at Babaganush. I ordered a hot Mediterranean pizza and boy was it hot! I never eat anything that hot, but I really wanted to get this baby out.

And it seemed to work!  I was awake pretty much all night that Friday with contractions (1-2 on the pain scale) about 10 minutes apart.  By Saturday morning they were less frequent but slightly more painful and by Saturday afternoon they were gone. Mum took me out to get a pedicure on Saturday morning which helped to take my mind off the contractions.

Mum and Dad went home Saturday afternoon and we carried on like normal.  We had a curry that night because hubby really wanted one for his birthday!  I woke up at about 4am Sunday morning with painful contractions. They were about 3-4 minutes apart and initially I was able to breathe through the pain, but as they got more painful I started making noises usually only heard on the farm!

We called our midwife at 6am and she came to assess me at 7am. I was devastated to learn I was only 2cm dilated! I thought for sure all the work I’d put in since Friday afternoon would mean I was at least 4-5cm. Fiona said she would come back to assess me again in 4 hours. That seemed like an age away at the time, but it went by surprisingly fast.

I spent those 4 hours either in bed, spread out over the bean bag, leaning on the kitchen bench, or on the toilet. My decision to eat a spicy pizza on Friday night and then a curry on Saturday night was coming back to haunt me. Fiona came back at midday and I was 5cm dilated! Fiona said we could make our way to River Ridge now and she would meet us there. I was so relieved that things were progressing quickly. One very bumpy car ride later (seriously, who puts a speed bump at the entrance of a birthing centre?!) and we were there, and I was in the pool by 1pm.

I had previously mentioned to Fiona that the only form of pain relief I wanted was gas, but only if I really needed it. When we arrived at River Ridge she showed me how it worked and I gave it a test run during a contraction, but it didn’t really help that much, so I decided to only use it if Fiona thought it was a good idea.

Getting into the pool was absolute bliss. It didn’t make the pain better, but the feeling of being weightless (well, almost) and surrounded by warmth was exactly what I needed. I contracted in the pool for about 2 hours, at which point Fiona was concerned I still had an “anterior lip” – a small piece of my cervix had not moved out of the way of baby’s head and if I tried to push then he would get stuck. There was also some meconium in the pool water, indicating that baby had pooed and was possibly a little bit distressed.

As much as I REALLY didn’t want to, Fiona asked me to get out of the pool and lie on the birthing bed so she could assess me and try to move the lip out of the way. By the time I had made it to the bed (a couple of contractions later), I was fully dilated and it was time to push.

I knew that lying on my back was not the best way to push baby out, so I tried on all fours but Fiona said I was actually pushing better on my back. So, with one foot pressed into Fiona, the other foot pressed into Nicole (a RR staff midwife, who we had met when she was a student in one of our midwife appointments), I pushed for about 45 minutes until 4:02pm when our baby was born!

It was such a massive relief, that last push and it was amazing when this crying, wet, squirmy baby was placed on my chest. Mark and I hugged and stared at our tiny baby. It took us a while to even ask what we had! Mark lifted one leg and we saw it was a boy. We were so happy! Both of us had thought he would be a boy, and we would have been just as happy if it was a girl, but just knowing what we had, after months of wondering, was such an amazing feeling.