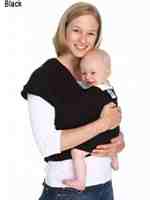 From the time I was pregnant with my first child in 2006, I coveted the Moby Wrap.  I’d spotted it on overseas forums, and put it on my wishlist of things I’d like for my baby.  Of course, not too many people asked what I’d like, and those that did, wanted to buy locally.  Buying from overseas was expensive due to high shipping costs, so I filed it away as something that I wanted, but likely wouldn’t have.

Then my daughter arrived, beautiful, sweet and innocent, but so full of wind.  She struggled to sleep, she puked all the time and trying to get the wind up that was so uncomfortable for her was nearly impossible.

Windy babies are sensitive wee creatures.  Because they’re so uncomfortable, they don’t sleep well.  While I was lucky she could self settle, it was simply unpleasant for her to sleep in a horizontal position.  I’d get her to sleep and then minutes later she’d wake crying in pain.  She didn’t fit the reflux profile, but she was most certainly uncomfortable. Most days the only way I could get her to sleep was if I held her upright on me trying to be as still as possible, as the slightest movement woke her up.  Some days she barely settled at all and my back ached as I walked the decks trying to pacify her.

I tried the classic style of baby sling, but while she would go to sleep in it, she couldn’t burp easily, so gas would build up in her wee tummy and by the end of the day she’d be miserable and worse than ever. I tried a front pack and she hated it, she was even miserable in a pushchair.  I tried a different style of wrap, but it stretched so much I was constantly retying it.  While it wasn’t working well for me though, it did seem to work for her.

By the time she was 4 months old I was desperate for something that worked for both of us as I felt like I was spending most of my day carrying her in my arms, and my body was certainly paying the price.  It was then that I decided to buy a Moby Wrap.  They weren’t available in NZ back in 2006 so I had to order it directly from the overseas.

No more aching back.  A baby that could sleep upright while I had my hands free and best of all a baby that could burp while in her carrier.  Best of all she was as snug as a bug and loved being in it.  (It didn’t take much to convince me to take on the distributorship for a product I loved so much).

Of course when you have an older child, life has to go on.  You don’t have the luxury of simply staying home the way you do when you have one child.  I was out and about within a couple of days and doing all the regular toddler activities.  Baby went in the Moby, toddler went in the pushchair or on the hip if necessary.

No longer did I have strangers cooing over my newborn and trying to touch her.   Baby was snug against me, and people were far less comfortable moving into my personal space than they would if she was in a stroller or capsule.   If baby was tired and I happened to be out, she was quite happy to go to sleep on me while I carried on life as normal. I didn’t need to put her in a filthy capsule at the supermarket, and wonder what dreaded lurgies she would pick up.  One time I was about to start grocery shopping and baby decided she needed to be fed NOW!  I was accutely aware that if I stopped to feed her that by the time I started grocery shopping she would be getting tired and fractious and my time was limited anyway.  So what could I do?  Well it really is possible to breastfeed in a Moby Wrap without anyone knowing what you are doing.  No one was any the wiser that I was feeding my baby while buying my groceries. (!!!!!)

My Moby Wrap was definitely one of my top 5 items for my babies, and one I would never again choose to be without.

I am really proud to now be the distributor of Moby Wraps, and we are pleased that Breastmates include them on the website for you to purchase.  (Available at the website here)