Waikato’s finalists in the 2011 Brancott Estate World of Wearable Art.  Aimie Cronin talks to the hopefuls about the blood, sweat, tears and hundreds of hours that went into making their masterpieces. 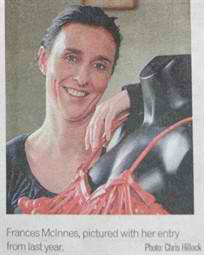 Frances McInnes pictured with her entry from last year (2010)

Competition director Heather Palmer says about Frances McInnes’ “Self Analysis Version 2.0” “A bit of fun about accepting our bodies as they are.  I’m sure the audience will enjoy the humour in this garment.”

When Frances McInnes polled 12,500 mums on Facebook to get inspiration for her WOW piece, she asked them which part of their body they liked the least.  The answer was a split down the middle:  tummies and bums.

So she got to work on the piece she describes as “quite a bold statement” and earned herself a place in the finals of the Open Section.  Her message, she says, is loud and clear: every woman is perfect the way she is.

The 32 year-old owns and operates Breastmates, a website offering products and support for motherhood.  Her Facebook page is filled with mums who talk about everything from breast pads to body image, and then some.

“The women liked the thread because they felt they weren’t the only ones with flabby tummies and wobbly bums.  They didn’t know what I was asking them for,” she laughs, but she wanted to tie the costume she made to a message for her Facebook community. 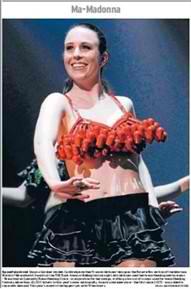 McInnes was a finalist in the Bizarre Bra section at WOW last year with her piece titled maMADONNA Nursing Bra that was made from baby formula scoops.

A trained engineer, she says she never got a chance to express her creativity until her adult years.  “I was a geek and they put me into maths and physics and chemistry lines at school…. I always wanted to do art, but it wasn’t encouraged.”

So she potted away at home making paintings for her children’s rooms and mosaics for friends.  A friend of hers headed along to a previous WOW show a few years ago, and came back urging McInnes to have a crack at making something.  After making the finals in last year’s section, she made something bigger and better this year and now she’s hooked.  She says it’s her way of relaxing after a busy day working on her website and being mum to her two boys, Angus 6, and Lochie 3.

This year’s entry took “about 300 or so hours of work” – every evening for about four months.  By the end she admits to being “a bit sick of it”, but she’s already thinking about next year’s entry.  Look out Facebook Mums.

WOW Runs in Wellington from August 25 to September 10 with the award winners announced on August 26.

UPDATE: You can now see images of our 2011 design here