During all four quarters of the year in 2008, Breastmates won four separate awards for Hitwise 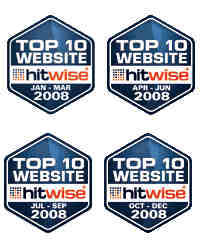 In 2009 Hitwise changed their system, and will only do the awards process twice a year, rather than quarterly.

On 2 September 2009, we were notified that our website won a Top 3 place for the first half of the year.

On 4 March 2010, we were again notified that we had a Top 3 placing.  We are super proud that we have been able to consistently achieve this!