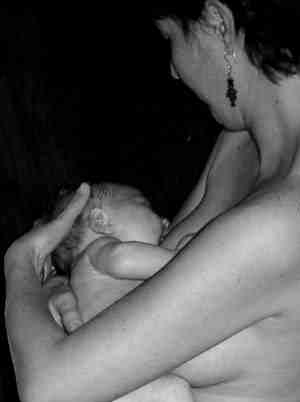 Frances McInnes, owner of Breastmates.co.nz says “it doesn’t all have to be about boobs and breastfeeding. We have come along way in New Zealand and breastfeeding is now the main choice. But let’s forget the guilt trip – people have to remember that whether at breast or bottle, the main thing is that mother and baby are both happy and healthy.”

Many Latch On events are planned around New Zealand for Friday 7th of August 2009. This is where groups of mothers meet up at an organized venue and try to breastfeed their babies at the same time in order to beat the previous years record.

Last year there was a record number of 1122 mothers and babies simultaneously breastfeeding around the country.

Frances, a mother of two children who have both been breast and bottle fed, points out that there is a lot of pressure amongst new mothers from health professionals these days to breastfeed.

She says, “for some mothers breastfeeding is easy, but for a lot of mothers it is really hard. This can put them under a huge amount of stress, and make them unjustifiably feel like a failure if they cannot breastfeed their baby. Once a mother has made the decision not to breastfeed, then she may feel a lot of guilt and judgment from others.”

The decision to formula feed after attempting to breastfeed is an agonizing choice for many women. A choice that they may not have had to make if they were given more support promptly. These days women are often rushed out of hospital before their milk has come in and before breastfeeding has been correctly established.

If breastfeeding is to be promoted by health professionals as the best form of infant nutrition, then New Zealand women need to get better support and information than what they are now.

This may mean that more specialized training on lactation is given to child birth educators, midwives and maternity nurses, and that there are more lactation consultants available for mothers at minimal cost.

A woman who is having difficulty breastfeeding needs to be seen within a very short time frame, otherwise her baby will go hungry. But if the right information is given to the mother, it could be the difference between whether she perseveres through the hard part, or makes the choice to switch to formula. We may then see the number of women still exclusively breastfeeding beyond six weeks, three months and six months extended.

Frances says with her Breastmates.co.nz business, she has come across a lot of mothers who want to express milk with a breast pump, because they can’t get the latching correct and don’t want to switch to formula. Perhaps if they had been able to access a free visit with a Lactation Consultant they may have been able to feed at the breast.

Breastmates are also involved with bottle feeding, and often come across mothers desperate for information and advice on how to prepare, mix and store bottles for example.

Breastmates have been using Social Media such as Facebook, Twitter, and Blogging to compile both breastfeeding and bottle feeding tips, that they will make available for others.

Frances’s website already has many articles on breast and bottle feeding, that she has made available for people to find at a time when they need help. Frances comments “we are lucky in New Zealand that we have safe choices on whether we feed our babies with breast milk or formula. The most important thing is that mother and baby are both happy and healthy, and that its not for others to judge.”