A mum shares the birth story of her son Mason 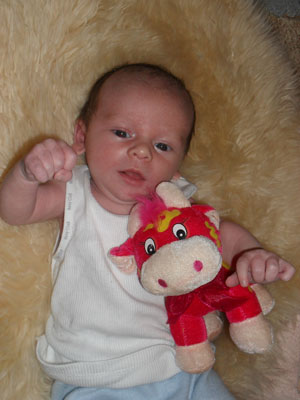 FRIDAY – DAY 1:  Was sitting at home on Friday night (25 June) watching Michael Jackson videos on music channel when I got a terrible pain in my lower tailbone area (6.38pm to be precise).  I wondered if this might be the start of something as I was due on 21 June.

I phoned my older sister who has 2 kids and asked her what contractions felt like.  I had been to antenatal but this was a pain that lasted a minute or so then went away but was nothing like what ante-natal, my midwife or any preggy books had said contractions felt like – totally different from Braxton hicks too.  I asked my sister about it and said it felt like there was a carrot up my bum. She laughed at me and told me it was probably a contraction but maybe my baby was trying to come out the wrong hole – cheeky!!!

Anyway these pains kept coming all night at about 10 minutes apart.  I was a bit disappointed because it was my midwife’s weekend off and I was praying they would stop until Monday.   Luckily I was able to power nap between each contraction – don’t know how I managed it.

SATURDAY – DAY 2:  the next morning I phoned my back-up midwife to check that what I was experiencing was normal.  She said it was and to soldier on.  That night the backup midwife called in to see me and took my blood pressure as it had been spiking during the last month of pregnancy.  The contractions continued through the night again varying in intensity and time – they were going between 10 and 20 minutes apart and lasting 45-1.45 minutes.  At about 2.30am I had a really bad one and vomited in the loo.  I was still able to power nap between each contraction.

SUNDAY – DAY 3:  I rested most of the day and contractions continued to come randomly and I went to the hospital to go on CTG machine at about 2pm and everything seemed to be going well.

MONDAY – DAY 4:  Went to my scheduled midwife appointment at 10.30am – my wonderful midwife Rebecca was back from her weekend YAY.  Rebecca gave me a VE and told me I was 3cm dilated.  She gave me some homeopathic tablets to try and get the contractions really going as they were still fluctuating and not getting any more intense or closer.  They seemed to work but by the afternoon they were losing their effectiveness.  At 5:30pm I met Rebecca at the birthing center and she hooked me up to the CTG again.  my little boy (we were told at our 20 week scan we were having a boy – but luckily had a second scan at 38 weeks confirming he was actually a BOY) was doing well but my blood pressure was pretty high and by now I was about 6cm dilated.  We set off to the hospital after a quick trip home to get the car seat – it was all on…….

I labored at the hospital until about 10pm when my midwife did another VE…. Hmmmm now I was only 4cm dilated.  Apparently my clever wee man had reversed back up, and spun around to face the wrong way.  I had my waters broken and my contractions continued – they had all been in my lower back which by now was really sore and I was unable to sit or lay down by this stage – it was far too uncomfortable.  I was told to expect my baby by midnight.  Not so.

TUESDAY – DAY 5:  At 1am I had another VE and was expecting to be 8-9cm dilated as I felt I was almost ready to give up so thought I must be at transitional stage.  NOPE.  Still only at 4cm.  I almost collapsed then!!!  Rebecca said ‘how about an epidural?’  She knew I wanted to go totally natural and hadn’t even tried gas or anything at that stage.  I told her I’d even consider a bullet!!  I had one contraction that lasted at least 5 minutes – it increased in intensity, started to ease off then increased again about 5 times!!  I was used to long contractions by this stage as they were all lasting at least 1.5 – 2minutes by this stage.

At 3am I was given an epidural – it was great!!!  I had total feeling in my legs but no pain at all.  Although I hated it getting inserted as I had to sit (really painful to do) and while it was going in I had another contraction – I had to sit there and not move at all.  TORTURE.

Luckily I was now able to have a real sleep until about 8:30am. I was getting pumped full of syntocin to help get the contractions really rocking along.  When I had my next VE I was still only 4-5cm.  apparently the syntocin wasn’t working so they tried to change dose sizes and even thought I might have been given a bad batch so they changed that too.  no success.  i continued with the epidural until about lunchtime when it was decided to go ahead with a c-section as it was thought my boy had his head in the wrong position and wasn’t actually going to come any time soon.  he was in no distress thankfully.

I finally made it to operating theatre at about 2:30pm and Mason Carl Cropp was born at 3:02pm.  92.25 hours after my first contraction started.

Although it was long and painful it was totally worth it and I would do it again in a heartbeat.