The October 2009 issue of Little Treasures magazine includes an article on pretty maternity bras, following a telephone interview that I had done with the writer. 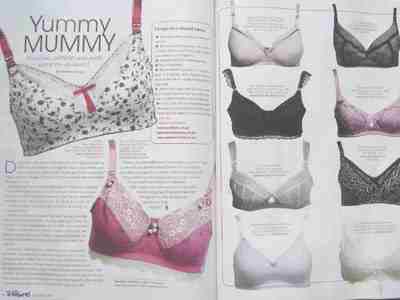 Yummy Mummy – Function, comfort and even some va-va-voom.  By Vanessa Johnson

During the early weeks of pregnancy changes start takign place in your breasts – and guess what -your boons now have needs!  Bra choice is no longer just about aesthetics, forget optimal clevage, the new priority is comfort and underwires are a no-no.

Mamalicious breastfeeding educator, Chris Kelly, explains.  “Underwires put pressure on the breast, which can cause blockage to the milk ducts because the ductal network extends under the armpit area.  It’s best to move to a comfortable soft-cup bra before moving to a maternity bra.”

When you’re ready to make that last bra step, usually four to six weeks out from your due date says Chris, the options are quite impressive.  Pretty, frilly, lacy, and sexy – today’s maternity bras aren’t mumsy.  However the experts recommend you choose a maternity bra based on how comfortable it feels, and comfort starts with the right fit.

Find a comfortable bra if your breasts are extra-large can be difficult, but Auckland lingerie shop Avakado specialises in bigger bras.  Owner Claire Long says the Freya brand is particularly good, as it goes up to an H cup, while Little Treasures columnist Jody Hopkinson, who wears a G cup while breastfeeding, says Triumph Maternity bras get her double thumbs up because of their support.

Things you should know: