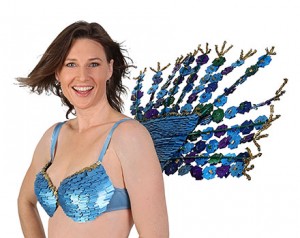 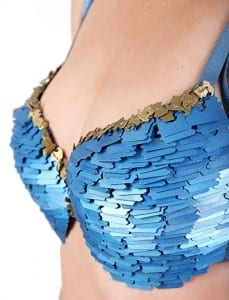 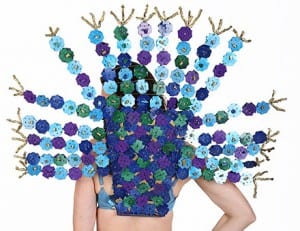 Arty Interpretation: Female birds are usually dull-coloured, brown, and fade into the background while the brightly-plumed males take centre stage. It’s time for this girl to come into her own: Equally stunning, equally noticeable, equally important! Inspired by the colourful, regal, unapologetically proud male peacock, this costume claims the striking cobalt, orchid, and turquoise hues of his feathers for the females. Highlighting the distinctively feminine silhouette of her bustline, this bird isn’t ashamed to step into the limelight and declare that women’s achievements and contributions deserve recognition, acknowledgement, and acclaim, whether she’s on the ground, in the nest, or taking flight.

Background: At a trip to the zoo with my children, a very majestic and insistent roaming peacock befriended us, demanding attention. While we were feeding him bread crumbs, I was fascinated as I examined the colour and form of his breast feathers, noticing how they interlocked. So often we see birds from a distance and admire their plumage, and this is especially true with peacocks, which are so striking and noticeable that it’s not until you’re up close that you can see the exquisite detail of their feathers. The encounter with this friendly peacock made such an impression on me, and inspired me to imagine this costume. Everything ties together – the bread crumbs and bread tags, the bird and bust details, the form and feathers. And I like the irony of converting a male peacock’s pride and joy – his feathers – into the most feminine of garments, the bra!

Collecting Free Resource to Recycle: About a year ago, I posted a plea to my friends on Facebook to save their bread tags for me. The word seemed to spread, and before I knew it, I was getting hundreds of envelopes of bread tags in the post! I loved hearing that delicate jingling sound of the bread tags rattling together in their envelopes when I collected them from the letterbox; much preferable to boring bills or work. For months, heaps of women had jars of bread tags on their kitchen benches, saving them for me – I became known as “the bread tag lady”. (Even now, people keep asking me if I’m still collecting bread tags.  No I don’t need any more!!)

Crafting: It took me quite some time, and a great deal of trial-and-error, to figure out how to manipulate the bread tags to the shape and look that I wanted. It involved a lot of drilling holes, painting, and baking in the oven to curl them into beads. It took three different variations of assembly to craft and then engineer the costume to a finished standard I was happy with. For some of the elements, it wasn’t until after I’d put them together, over many, many hours of work, that I realised what I’d done would cause the costume to be too heavy or difficult to wear, so I had to undo, unpick, and revise. Two weeks before the due date, I tried the garment on and my six-year-old son bluntly informed me that it looked “dumb” and “not like a peacock” – the back tailfeathers were floppy, not upright and proud. So I redid the entire back of the costume, and that was the best piece of feedback I received!

I enjoyed crafting this piece, and seeing it come to life.

Unfortunately this garment didn’t make it through to the finals, and so won’t be appearing in the World of Wearable Art show this year.

You can see my previous entries.  I’ve made 4 now, and 2 have been in the show. 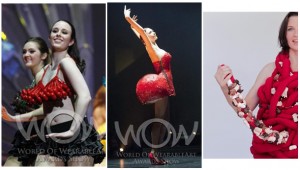 PS special thanks to my friend Sarah who modelled this